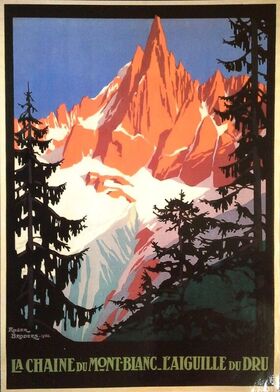 Death in the Kingdom of Pines

Chamonix, Haute Savoie, France, February 1931
Marie-Laure Monaghan was making her way to work. As she came out of     the  forest and stopped to put on her skis, excitement rose up in her. “I’m     going to work,” she told herself. An icy wind off the glaciers on Mont Blanc hit     the back of her neck and she shivered. But as she looked across the valley of    white snow and black pines to the towering rocks beyond, she was sure it     was going to be a beautiful day.
It was not yet eight o’clock and the sun was still behind the mountain. Below her was a stretch of snow, at the bottom a row of buildings, including a café where glass doors gave on to a small terrace with views up the slope. Beyond the buildings was the road to Chamonix. Until three years ago, this modest hillside had been the field where the pigs were kept. Now it was a ski piste. A nursery slope admittedly, and one crisscrossed with tracks and pitted with holes where gravity had got the better of beginners, but recognisably a piste. It had its part in the unstoppable craze for skiing which was sweeping the French Alps, bringing money and glamour to downtrodden villages, dragging the bemused inhabitants out of their dark chalets and turning the deathly Alpine winter into a season of speed and fun.
And for Marie-Laure, this slope was now her workplace. She buckled on her skis, then hesitated, suddenly aware that anyone in the café would be able to look out and watch her descending. New pupils could be seeing her, their ski instructor, arriving for work. Suppose she fell? Her face burned with the imagined humiliation. It was too early for pupils to have arrived but her fellow instructors might already be there. The thought of them gave her a fierce determination to ski the short slope beautifully. So she did.

At the bottom, she took off her skis and leaned them on the newly-built rack, smelling of fresh pine. She knocked on the glass doors and Pierrot let her in.
The café was quiet. “Where’s Harald?” she asked.
Pierrot shrugged. “Out for a first run I suppose,” he said. “No lessons until half past nine.”
“Actually I’m giving an early morning lesson,” Marie-Laure announced.
Pierrot shrugged again, with what she was sure was a deliberate lack of interest.
“Yes, I’m expecting my client in about fifteen minutes,” she went on. “So can I have a cup of coffee first?”
Pierrot gaped at her. She wasn’t sure if he was being rude or just stupid. Both probably. He was a gangly youth who opened up the café for Harald in the mornings, manned the bar at night and helped out with ski lessons during the day. He wasn’t exactly an instructor, in her view.
“You want some coffee?” he said. “I thought you English girls drank tea.”
“I’m not English,” she said firmly. “We’ve been through this already.”
She sipped the coffee, looked out at the snow and waited for God’s Gift. The clock ticked to 8.15. 8.20. He was late.
“Your pupil’s late,” Pierrot said, helpfully. “Who is it anyway?”
“Monsieur Siebert. Um, quite a loud man…” Marie-Laure searched for words to describe him without sounding ungracious. What if he was a balding show-off who fancied himself as God’s Gift to Women and had pinched her bottom when he booked the lesson? A paying pupil was a good pupil.
“The pushy poseur with the big moustache?” Pierrot suggested. “He’s probably still in bed with a hangover. If it’s the bloke I’m thinking of, he was in here till past midnight last night, completely legless.”
Marie-Laure’s heart sank. That sounded like her man.
The Café des Sports was quiet in the first rays of sunlight. It was an old-fashioned place, with a tiled floor and hard metal chairs. The café took up one corner of a plain, square building which fronted on the main road. Once, it had been the Bar des Houches, where men in blue overalls sat over their red wine and women never crossed the threshold. But three years ago it had been bought by the famous ski champion Harald Sigursson, renamed the Café des Sports and turned into the hub of his ski school.
There was a rush of cold air as the door opened and Harald entered, vigorous and in a good mood from his morning run. But his expression darkened as he looked around the café.
“Where is everybody?” he demanded.
“Jean-Luc is giving an early lesson,” Pierrot said.
“And Raymond?”
“Er, Raymond is…” At that moment the front door opened and a bulky figure came in.
“…Late!” barked Harald.
Raymond took off his coat and offered no apology, just settling himself on a stool at the bar. Pierrot sniggered, like a naughty schoolboy protected by his bigger friend. Harald was prevented from saying more as the front door opened again and five men entered, carrying skis and dressed in tweeds and thick jerseys. Harald took them over to his office – a designated table in one corner of the bar. Marie-Laure knew he was giving them his usual introductory talk on the benefits of the Harald Sigursson ski tuition method.
“Not working this morning Marie-Laure?” asked Raymond.
“She’s waiting for her pupil,” said Pierrot.
“Oh yes, your rich guy,” said Raymond. “He hasn’t turned up? What a shame. Maybe he’s not happy with the, er, service he’s getting from you. Maybe you should have given him what he wanted.”
Marie-Laure sat stony-faced.
“Maybe she did give him what he wanted,” said Pierrot gleefully. “And now he doesn’t need to bother with a ski lesson just to get a poke.”
“What was he like then Marie-Laure?” Raymond persisted. “Big bloke is he?”
“I wouldn’t know,” she said, trying to sound as neutral as possible.
“Come on,” said Raymond. “You’re not at the convent now. You won’t get pupils by acting like a nun.”
She wasn’t going to rise to this. “He’s just late,” she said.
“Oh well, of course, He was planning to do a warm-up run before he had his lesson with you,” Raymond said casually. “Yeh – didn’t he tell you? He mentioned it when we were chatting at the bar last night. I told him to drop into the P’tit Alpe while he was up there. You know Old Pascal is selling his pear brandy from behind the cowshed now. Just the thing to get you going in the morning.”
Suddenly Harald was there. “Enough!” he snapped at Raymond and Pierrot. “I’ve got clients here expecting to start their morning’s lesson. Now get going. My ski school has a reputation to maintain.”
“We haven’t finished our coffee…” Pierrot whined.
“Fuck off out of here!”
They did.
Once again the bar was quiet. “Idiots,” sighed Harald. “And why are you still here Marie-Laure?”  She explained again that her pupil, Monsieur Siebert, had not turned up.
“But I saw him,” Harald said. “An hour ago – more. He was heading this way, carrying his skis. Said he’d booked an early lesson and was going up the mountain road for a practice run first.”
Marie-Laure looked out at the slopes. “I’ll go and find him. He might have got lost.” She got up and reached for her jersey.
“Surely he can look after himself,” said Harald. “He told me he’d been a telemark champion in the Jura and was just coming to us for a little refresher course.”
“He told me that too. But in truth he can barely stand up on his skis,” she said. “I’d better go.”
“Yes you’d better go,” Harald said grimly. “If he breaks a leg he might not pay.”