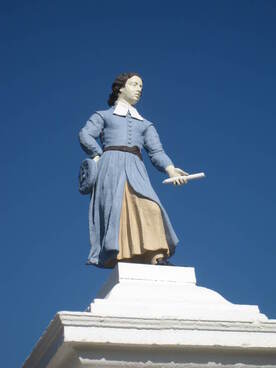 Midnight Nell and the Tunnel of Dreams

They call me Midnight Nell, because that’s my name. You can barely see me in the dark, except for the glow of my eyes. You might take me for the black dog of legend, harbinger of misfortune and death, but I’m not saying that’s me.
Blind George, my master, just calls me Nell. He doesn’t care about colours. I do the seeing for him and he plays the fiddle and that’s how we eat. We’ve been working the highways and byways for a couple of hundred years now. You might have heard of us.
We’d just come out the pub and George was lurching a bit. I was licking my chops to get the last flecks of a steak pie crust that someone had thrown for me. We walked along the lane, not going anywhere in particular. And there, at the crossroads, was the Devil.
“Hello George,” she said.
“What do you want?” he grunted.
“That’s not very friendly,” she said and she bent down to stroke me and fuss my ears. She smelled of blood, and chocolate, two of my favourite smells.
She swished her long red hair and then took out an elastic and put it in a ponytail, to look more businesslike. She tapped the toes of her high-heeled boots. “I’ve got a job for you George,” she said.
“How much?” said George. “I may be blind but I ain’t stupid.”
I nudged his hand with my nose. I thought he should be nicer to her. After all, she did give him her best tunes.  But she didn’t seem offended.
“You’ll be rewarded. Have I ever let you go without? Now, people are digging, George. Can’t you hear them?”
George’s head was muzzy with strong ale but I lifted an ear and listened. I heard, faintly, the dull crunch of a pickaxe on hard ground. It was in the town, 20 miles away (I have very good hearing).
“They’re underground, George. That’s my realm. I have interests down there I want to protect,” said the Devil. “They’re calling me, these diggers. But I’ve got things to do, places to go. I can’t attend to them. So I’m sending you. Take your fiddle George and play them a few tunes.”
“I got things to do too,” said George. He was in a bad mood. “I’m not at your beck and call.” Of course, that’s not true. He is human, still.
“One of them is a woman,” said the Devil. “Dark haired, slim, the sort you like.”
"Huh,” said George.
The Devil sighed impatiently. “Just get on with it.”  She snapped her fingertips and a rabbit appeared. Not a fluffy white bunny out of a hat, but a rabbit from hell. A hell-rabbit, big as a pig, with red eyes streaming with pus and huge yellow teeth. An enormous rabbit hole opened up in the road and the enormous rabbit plunged down it.
“No Nell!” shouted George. But it was too late. I am a dog. Dogs chase rabbits. No matter that the rabbit was twice my size and carrying every known disease. I had to go after it. I dived down the hole after the rabbit and Blind George, holding fast to my lead like he always does, dived down with me.
The Devil laughed happily and the hole closed above our heads.
There was no sniff of the rabbit once we were down there. I should have known.

So, here we were again, underground. This is where it all started, where we were pressed into service, two hundred years ago. You probably know the story.
They had all been drinking, George and his mates, and they’d hatched this plan. There was a hole, in the side of a mound, just outside the village. People called it the cave and they said a tunnel led from it to the Hall, three miles away, where the squire lived. George’s mates wanted to creep through the tunnel and raid the squire’s brandy cellar, which was said to be the fullest in the county.
Problem was, George’s mates were scared of the dark. But they reckoned, George wasn’t. And anyway he had me. So the plan was to send George into the cave, playing his fiddle. We would make our way along the tunnel, George playing his fiddle all the while, so that the men up top could tell where we were. And we would move along like this, us below, them above, following the tune, until they could be sure that the tunnel reached the Hall.
George agreed. No one asked me what I thought of it. Into the cave we went; it smelled of chalk and beetles. I nosed along to the back and found the tunnel, in a waft of cold, subterranean air. George started to play and I led him down.
According to George’s mates, they heard the fiddle and began to track the notes under their feet. They followed the tune more than a mile, across open fields, around cows, over hedges and through ditches. George kept up a good pace, pulling them along with his magnetic music. Then, he stopped.
According to George’s mates, there was an unearthly shriek and four minutes later I came yelping out of the cave with my hair singed off and no tail. They never saw George again.
This is a complete fiction.
True, they never did see George again, but nor did they see me. I still have my tail. There was no shriek. We’re not babies. The cowards concocted that story to cover up the fact that none of them ever ventured down the tunnel to find out what had become of us. Not that it would have done them any good. We had gone, sent off by the Devil on our first mission. I can’t give you the details, but we’ve been busy, over the years.

​     Here we were then, down another tunnel. It was blacker than the bottom of a cauldron of pitch, but that didn’t bother me. I knew where to go. I could smell the town: I was getting petrol, pizzas, parking wardens. I could hear the digging. They call me Blind George’s eyes but really I’m his nose and ears. Much more reliable organs, I find.
It was a way to walk but George was playing his favourite tune, Brighton Camp. You probably know it as The Girl I Left Behind Me. He has his own ditty that he sings to it, in his rasping voice.
“So follow me and hear the song,
Don’t mind the wind and weather.
Oh stick with me, it’ll all make sense,
The ends they’ll tie together.”
Underground, you never know quite where you are. Or when. We were very deep, I could tell that. I sensed the weight of earth above us and it made the hairs on my back rise. I tugged George forward a little faster.
To begin with, I couldn’t detect much life in this underground world. There was the rock, of course: chalk, flint, some clay. Rocks have their smells but they don’t say much. From time to time I caught a whiff of something metallic. Buried treasure? Broken swords? Lost ploughshares? I couldn’t tell. George played his fiddle and the music floated through the passage, which spawned other tunnels as here and there openings appeared and paths branched off to left and right.
I smelled sweat; we heard running and a man blundered towards us. He grabbed George by the coat and pressed his face close. He was white as a corpse. “Have you seen anything?” he demanded.
“Like what?” said George.
“Jesuits. They’re everywhere, flooding in from France. They’re using the tunnels to infiltrate the whole country. Have you seen anyone?”
“No,” said George, confidently.
The man released him and stumbled off along the tunnel behind us.
I was getting hungry but there was nothing to eat in this place. Not even a root penetrated the earth above us and we were too deep for rats. Not that I would eat a rat. In the darkness, I was misled by some of the flints: they looked like bones. I smelled something. That was a bone, surely, poking out of the wall. I seized it eagerly. Ugh! It was a bone but turned to stone. Hippopotamus – Mesolithic period I would say. Pah! The sooner we got to town the better.
There seemed to be more things present in the tunnels. You’d be surprised what George can call with his fiddle. We came across two soldiers, sitting on a tea chest, playing cards. They looked up, their faces dull. “Is the war over yet?” one asked.
“Shouldn’t think so,” said George, and they went back to their cards. We moved on.
At a place where our tunnel met two others, we paused for breath. A man slipped out of the darkness, wrapped in a black cloak, clutching a silver cross.
“On me poursuit,” he whispered.
George nodded. “Il est passé par là,” he said, pointing to one of the side tunnels. (You didn’t know he could speak French, did you?).
“Merci,” breathed the man, and he began to run down the tunnel we had come from, unknowingly pursuing his pursuer.