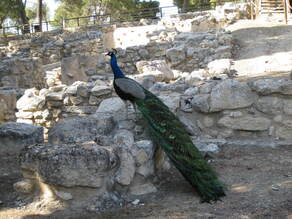 
At her desk in Bath, Jane leaned back in her chair. She felt tired, having been woken soon after dawn that morning by what sounded like a pistol shot. An ensuing clamour from the gardens below had prevented her from getting back to sleep and she had been afflicted with a headache since breakfast.
It surprised her that people fancied she had based the town of Meryton on a particular place. She tried to remember what Hertford looked like, but she had no recollection of it, nor of Hatfield, nor Ware, nor Harpenden, nor the other towns she must have visited.
Yet the memory of the excursion all those years ago had stayed with her: the green tunnel through the woods, the perfumed smoke from the fires, the glimpse of a young man’s bare chest through the thin cambric of his shirt as she gazed with him through the windows of Essendon Place and they talked of books while the peacock’s swaying tail swept the lawn.
But it was a long time ago and tomorrow she would be going back to Hampshire, where she belonged.


Note: Pride and Prejudice, published in 1813, is set in Hertfordshire. Unfortunately, there is so little description in the book of the locations that it is hard to tell if Jane Austen was writing with first-hand knowledge of the county. However, she did have relatives in Hertfordshire and she is precise about some geographical details, such as the distance of the fictional Meryton from London and the route of the Great North Road.
There is much debate among scholars and Austen aficionados as to the identity of the ‘real’ Meryton, Longbourn and Netherfield. Hertford has often been taken to be Meryton, in which case Hertingfordbury would be a good fit for Longbourn, but claims have been made for other towns, including Harpenden. Some well-researched arguments can be found at Julie Wakefield’s blog www.austenonly.com  (see 8 February 2013) and at  www.jasna.org/persuasions/printed/number27/smith.pdf